Lessons from Walmart: Smart Strategies for Retailers of All Sizes

Just because no one has the resources that Walmart has - it doesn’t mean retailers can’t take some of their growth strategies and scale them to their business. Learn how Walmart is using smart acquisitions and smart strategy to grow its business. 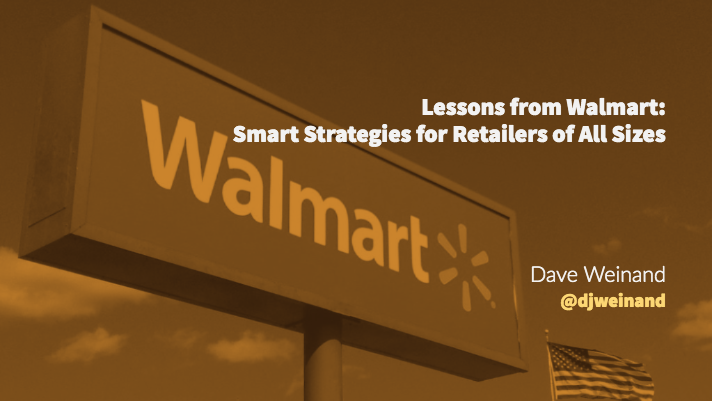 We’ve all heard it dozens of times; “If we had the resources of (fill in the blank big retailer), we could compete better; improve our margins; provide better customer service, etc, etc.”

It’s no myth that retail is a really hard business. Some are definitely better than others and one, in particular, is doing all the right things: Walmart. It’s also no myth that there is really only one company that can compete with Walmart on the resource front and this is a little bookseller up in Seattle. However, while the strategic moves they have made may be out of scope for other retailers, it doesn’t mean they can’t be emulated.

Walmart has been on an acquisition tear for the last decade. The acquisitions can be segmented into three categories:

These are not mutually exclusive as these categories can and do bleed into each other but let’s dig into these one at a time.

To Learn and Better Innovate

Innovation as a concept is hard to understand. To bring it to life is even harder. A legacy retailer like Walmart may say they want to innovate but how to get there from a process and culture perspective is hard to build from scratch.

So what did they do? They bought a little known social media start-up in 2011 called Kosmix. This acquisition was less about the platform and more about the founders - who knew how to drive innovation (including a price comparison engine that could compete with Amazon). Kosmix is what became Walmart Labs and as history would show, provided a roadmap for Walmart to use: to acquire skill sets or market segments they saw as strategic.

Fast forward to 2016 when Walmart.com had just closed out its’ 2015 online sales at ‘just’ $13.7B (to Amazon’s $107B). There was a realization of a need to drastically improve its e-commerce business across the board to better compete. Rather than try to grow organically with the current team, the decision was made to acquire Jet.com, its proprietary algorithms and more importantly, its people. Not only had Jet.com built a better pricing mousetrap, but they also had a superior logistics and delivery system that could scale to Walmart.com. They’ve been able to leverage this technology and Jet.com’s founder, Mark Lore, to drive Walmart’s e-commerce sales up 40% overall in fiscal 2019.

Last mile delivery is a challenge that is yet to be completely solved (at least profitably) for most retailers that are not named Amazon. Even Walmart, who has for some time tried to get better penetration in urban areas (more on that later) needed to get better. Is this an easily attainable skill? No. So in 2017, they acquired Parcel, a New York based delivery company. This has enabled them the ability to learn best practices to then roll out to both Jet.com (and their JetBlack service) and Walmart.com divisions.

Finally, just as the evolution of AI and machine-learning based technology is proving its real-world chops, Walmart snapped up Aspectiva out of its Store No. 8 incubator earlier this year to provide more intelligent product recommendations to customers. As personalization has become a major driver in providing an optimal customer experience, this acquisition follows a clear pattern from Walmart that innovation that is tied to business strategy can be acquired a lot quicker than it can be built.

What to do when you’re not Walmart

While it’s unrealistic to suggest that a retailer go spend $3B for the likes of a Jet.com, it doesn’t mean there aren’t really clear lessons a retailer can glean from the Walmart strategy:

The point is; there is currently an incredible burst of innovation happening in the brand and start-up retail environment. Retailers should be looking to access some of that talent and bring it in house as Walmart has done to not only stay relevant but to scale in areas even a retailer their size hasn’t yet achieved.

In the next blog in this series, we’ll discuss Walmart’s second growth strategy - To grow current segments or expand into new segments.